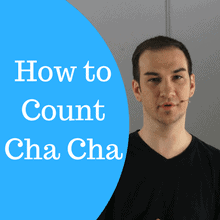 Watch the video and let me know if you have any questions.

The first 3 beats are full beats and the cha, chas are half beats.

The key is to realize that the full beats are slower and the half beats are faster – That means as a dancer you need to make sure you give the right amount of time to each beat.