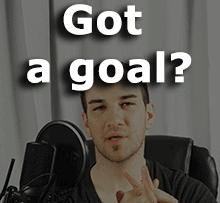 Setting goals in life is important but do you set goals in dancing too? Most people don’t even think about why they are even dancing – Let alone make a concrete goal to work towards. In this podcast I discuss why you should have a goal and also give examples of the types of goals one can thrive for.

Hello and welcome to today’s Passion4Dancing Podcast. My name is Leon from Passion4Dancing.com where we teach people how to dance online and today, we’re talking all about goals.

Do you have a goal for your dancing? Well, if you don’t, you’re probably missing out. Here’s the thing. In almost every aspect of life, people tell us that if we want to achieve something, it’s better to set a goal.

So for example if you want to lose weight, making it as specific as possible will help. So you could say something like, “I want to lose 30 pounds in the next three months for example,” right? This is very specific. It has got numbers in there, right? Thirty pounds in the next three months and now that you have that goal, you can go ahead and make a plan and break down the steps along the way of how you’re going to get to losing that weight, those 30 pounds in 3 months.

For example you’re going to say, “I want to go to the gym three times a week and I want to take two dance classes with Leon,” or something like that. It doesn’t have to be with Leon. It can be with any dance teacher in your local area.

So you have all these different goals that you can choose from. It doesn’t matter what it is. It’s just important to choose one. Yes? Wedding couples, they have a specific goal normally. They come in to prepare for their first dance. That’s a goal as well, right? There are people who will have showcases of their studios, so they’re preparing with their teacher or show a number of choreography for a certain date. That’s a goal. Just choose a goal and the more specific it is, the better.

Now let’s talk a little bit about why you want to choose a goal. Well, here’s the thing. You’re going to improve 10X if you have a goal versus not having a goal. OK? For example, if your goal is to be able go out into a competition in three months, you better believe you’re going to be in the studio practicing. You better believe you’re going to be disciplined enough to show up to your private lessons consistently and practicing on top of that at home. You know, visualizing your routines in your head because you know you’ve got that date coming up and it’s very specific. You got to be ready, right?

Now you have some time until that party. So what are you going to do? You’re going to start making the specific steps in order to get to your goal, right? Now that you have a defined goal, you can actually figure out how many group classes I should take per week. Maybe I need some private lessons. I need to watch some of Passion4Dancing’s videos. Maybe. Maybe you need to find a partner to practice with.

Think about anything you’ve ever achieved in your life. You probably did plan out or have some thought into how you’re going to get whatever it is that you’ve got. It’s the same thing with dancing. Yes? Even if you just want to be able to master beautiful hip action, that can be a goal as well. You still need to maybe schedule some practices in order to get that. Maybe take some lessons to figure out what is the correct hip action for me to even practice.

All those are good goals and again I want to say that it doesn’t matter what your goal is. It’s just important to choose one.

All right. Thank you very much for joining me today and we will see you guys next time.

Related:
Should you teach you partner?
Best dances to learn for social dancing
learn 1 dance or multiple dances at the same time
More dance articles and tips