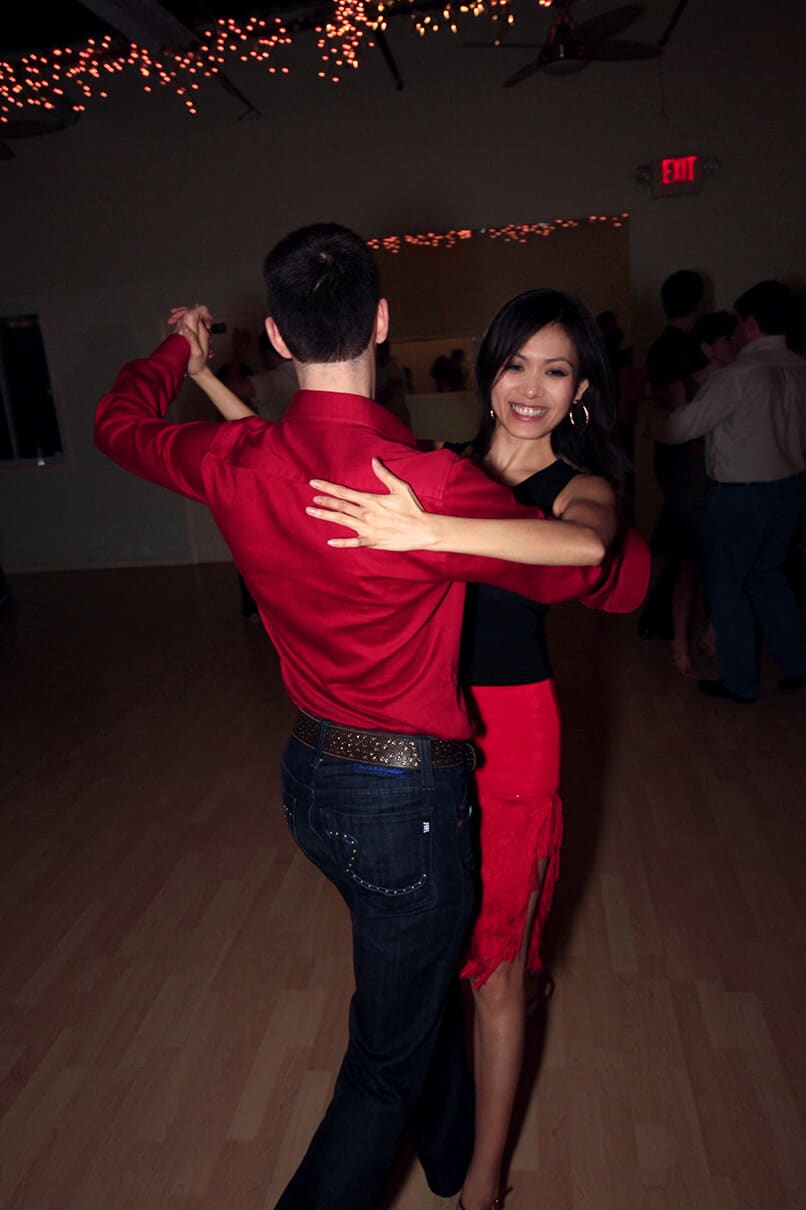 The following is a post by Alex Jacobs from dancingthroughtherecession.com. Enjoy!

—-
When Leonid asked me to write a guest article for him I was excited. I’ve followed his posts on message boards such as Dance Forums and have subscribed to his e-mails and videos since this website launched. While I maintain my own blog, it’s largely focused on financial aspects of dancing, while Leonid’s site is filled with educational resources. What could I contribute here that would be unique from the pieces on my blog while complimenting Leonid’s pieces? I wasn’t going to try to produce online dance lessons or training advice – I knew I couldn’t compete in that arena – but looking around the site gave me some ideas.

For the most part, Leonid has two types of instructional videos on Passion4Dancing: American rhythm, such as Rumba dance steps, Cha Cha dance steps, and club Latin, such as Salsa dance steps and Merengue dance steps. To the novice dancer these are the same styles: Latin. Even the dances tend to blur together in the beginner’s mind. While there could be a great article about the differences between different dance styles, and more heated words have been uttered about the differences between American rhythm and international Latin than I care to think about, I don’t think we need another rehash of stylistic differences only to end with the moniker, “Of course creative interpretation can result in legitimately breaking all these rules.” Instead, I want to talk about why and how we choose one style over another.

Whenever I get a call or e-mail from a prospective student, one of the first things I ask him or her is, “Are there any particular dance styles you want to learn?” Now if I leave the question like that, as I did when I first started teaching, I invariably get back confusion. There are different dance styles? How is hustle different than waltz? How is ballroom Latin different from club Latin? Which one should I learn?

As a teacher, I’ve learned to include follow up questions. “Are there any specific dance styles you wanted to learn, or any types of music or specific songs you wanted to dance to? Is there an event you need to prepare for?” These questions help me figure out what style the student needs to learn even if the student doesn’t know. Since you’ve gone out of your way to read this article on a dance education website, however, I’m going to assume that you’re past that point; I’m going to assume you’re already in lessons and familiar on some level with different dances and maybe even different styles. This article isn’t for the complete neophyte trying to narrow down dance options, but for an advanced-beginner to intermediate dancer to figure out how to concentrate his or her efforts.

Every Style has a Purpose
There are nearly a dozen dance styles, each with several dances within their purview. These include:

Now one of the first things we note is that many dances are listed in multiple style. There is American rhythm rumba and international Latin rumba. Merengue is both an alternative American rhythm and a club Latin dance. Tango shows up four times, in American smooth, international standard, Argentine tango, and vintage dances! As I said above, we could do a whole article about the differences between the styles, but that’s not the purpose of this article. Instead of focusing on the differences between smooth and standard, let’s look at why someone would choose to dance smooth or standard.

Every style was created to accomplish some dance goal. Smooth, for example, was created largely as the results of innovative dance teachers such as Arthur Murray to standardize social ballroom dances so that they could be taught to the public. While waltz was an old and established dance, the waltz that Arthur Murray created, and that eventually became smooth waltz, was very different from the vintage waltz that had previously been danced. Likewise, international Latin was created as a way to sanitize Latin dances that were in fashion so that they could be marketed to upper class Europeans, then was refined and standardized for competition purposes. Club Latin developed organically as a response to trends in music and social dance.

This is not to say that a dance can only be used for its original purpose – smooth is a social style but is my favorite style in competition – but if you know most of your dancing will be under circumstance X, then it behooves you to choose a style that excels under circumstance X.

What Can your Teacher Teach You?
The purpose of the dance is only half the battle, however. One of the best pieces of advice I received back when I was a student was to choose my courses not by the subject matter but by who was teaching the course. A good professor could make any subject come to life and get me interested; a bad professor would kill my love for the material. The same is true for dance.

This isn’t to say that dance teacher can’t teach outside his or her specialty – some of my best training in rhythm came from a hustle teacher – but a teacher who specializes in a given style or even a given dance doesn’t just know that style; he or she probably loves it. That love is something that, while it can’t be taught, can be inspired because the teacher sees the dance not just as a technical exercise, but truly understands the life and beauty of the dance. While I was largely ambivalent about hustle before I started working with my current teacher, she’s shown me levels of intricacy and beauty in hustle that I would never have discovered on my own or if I only worked with ballroom teachers.

It’s hard to know if you love a dance style until you start dancing it. Not until you try it, not until you get a few lessons in it but until you start dancing it. Think of how different open cha cha is from pre-bronze cha cha. Or a right underarm/left side pass/sugar push combination is from an improvised west coast swing that matches every hit and break? The point is that one doesn’t really know what a dance is like until one advances quite a way in it, and even seeing it danced at a high level can’t communicate that feel. An instructor who has that feel, however, can give you a sense of what the dance will be like once you reach that point, even before you reach that point.
Now one could make an argument that one should seek out teachers who specialize in the style you’re interested in for just this reason. To be fair, that’s not a bad way to go about one’s studies; my dance partner and I have a coach for smooth and rhythm, a coach for standard, and a coach for Latin, and we’ll probably be splitting the smooth and rhythm up between the current coach who specializes in smooth and a rhythm coach once our funds improve. But that’s not the only way to go about it. Instead, try different teachers until you find the teacher you love no matter what style he or she teaches, then focus on the style the teacher things you should learn.

Don’t Worry About Style
When all is said and done, however, style ultimately doesn’t matter. Oh, that’s not to say that it’s irrelevant – after all, we need to match our dancing to the music for social dancing, and if we’re competing staying within one’s style is absolutely essential – but dance isn’t about the style. It’s about dancing.

When my dance partner and I go to a social dance, we don’t do international cha cha, then American cha cha, then club cha cha. We mix and match as we go. We take what we love in all the styles and let it blend. What makes a style isn’t the figures, which can be easily crossed over, nor is it the technique (if Donny Burns can land on a flexed knee in Rumba then anyone can). A style is defined by the feel of the dance. Let yourself explore each dance, really explore it and get into it, you’ll be amazed what you find there.

—
About the author:
Alex began dancing in highschool during the neo-swing craze of the late 90’s but switched to ballroom in college. After graduating he continued his dance education becoming a very active social dancer. In 2007 Alex moved back to his hometown to work for a national franchise, then left and began teaching independently two years later. Currently Alex is an active competitor in the amateur and collegiate circuit and holds certifications with High Honors in smooth, rhythm, and hustle. Even with competing and professional training, Alex remains focused on social dancing. “Dancing is for everyone,” he says, “and can be different things to different people. It can be a technical pursuit, an artistic one, competitive, or something you do just for fun. It can be any of these, all of them, or whatever else you want it to be. All that matters is what you want to put in.
If you’d like to work with Alex, he can be found in the Philadelphia area at The Dance Muse in King of Prussia or Top Hat Dance Studio in north Philadelphia.

Related Articles:
Fundamentals first…
A practice tip from Markus Homm
The problem with dancing with the stars