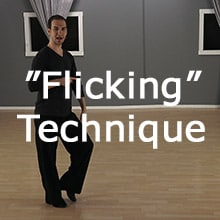 In this International Style Rumba Technique lesson you will learn the “Flicking” technique used in most Rumba steps. Flicking is essential to improving your dancing if you want to develop better musicality in your dancing. I t will also develop quicker and sharper leg action.


Are you ready to flick? Let’s get started.

Hello! Lean here from Passion4dancing.com. And today, we’re talking all about flicking. What is flicking anyway in our dancing? Well, the kind of flicking I’m talking about is flicking your legs or your feet.

So this right here if I’m doing the international style rumba walks, this is me flicking as I’m walking. Yes? So what you can see is my leg is bending and then when it strikes the floor right here, this quick action from the knee down, this is what we call – this is what we mean when we say flicking action of the leg.

And there’s a lot of people work on this because their teacher is telling them. And why do the teachers tell them to work on their flicking actions? Because a lot of times, people get a bit drifty. So a lot of times, I’ll show you the wrong way right now, if I’m doing the same basic steps, people do this. Two and three and four and one and two and three and four. So they kind of like drift from place to place. Instead of arriving and flicking using that knee joint to strike that leg fast and hit the heel on the floor as fast as possible. That’s your objective, is you want to basically arrive with your heel down very quickly.

So see, I’m trying to flick on the count which is going to give me a much better – a much more precise timing which we want. So if you want to be a better rhythmical dancer, you want to work on your flicking actions.

So very simply, you can do the basic step and think about it. You can also do the rumba walks which I taught a little bit. So even we’re not focusing on anything else like hips and stuff like that, you can just do this.

So that’s what you want to do to improve your arrival on the beat and we call it the flicking action. Do you work on this? Leave a comment below. Let me know.